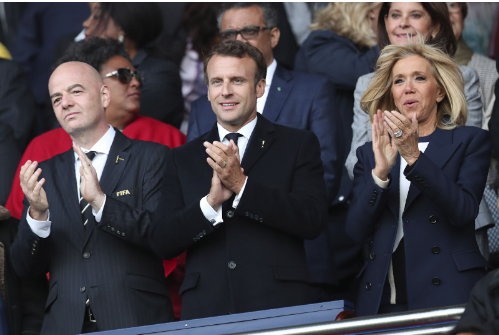 The French president Emmanuel Macron celebrates the nation’s victory with a tweet, “En quarts!” as France enters the quarterfinals.

The defending champion, France, has secured its position in the quarterfinals of the FIFA World Cup 2022. France, a two-time World Cup winner, faced a tough fight against Poland in the round of 16 on Sunday. France defeated Poland 3-1 in their World Cup last-16 match at Doha’s Al Thumama Stadium.

Emmanuel Macron, the French president, celebrated the nation’s victory with a photo of strikers Kylian Mbappe and Olivier Giroud on Twitter and wrote, “En quarts!” which means in the quarterfinals. Kylian Mbappe scored two goals in this game, giving him eight for the FIFA World Cup. Former England striker Gary Lineker tweeted about this triumph as well, praising Kylin Mbappe for scoring the World Cup’s fourth goal and for leading all scorers overall.

Olivier Giroud has always been a key player, according to France coach Didier Deschamps. Beating Thierry Henry’s record, 36-year-old Olivier Giroud has made history by scoring the 52nd goal for the national team. Oliver had secured a goal just before halftime, leading his team against Poland.

France dominated early on and maintained possession of the ball. The French players Giroud, Mbappe, and Griezmann have had excellent strategic movements, ensuring the football passes to their teammates are precise and apt. On the other hand, goalkeeper Hugo Lloris ensured that France did not concede any goals. For the next match, France will face England in the quarterfinals on December 11, 2022.